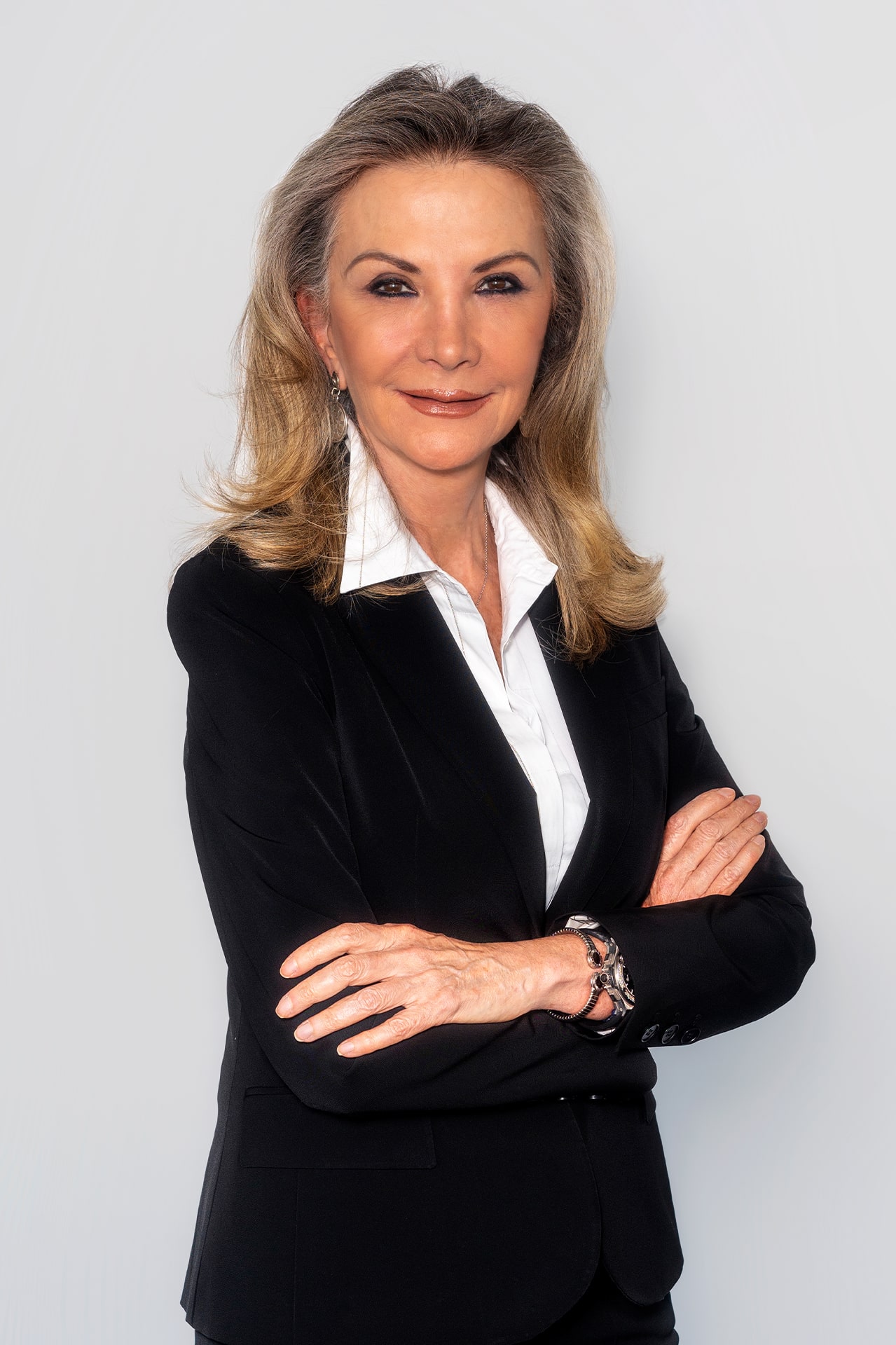 When the small plane carrying her father crashed, it killed more than Gina Barroso’s father. It also silenced a very important voice in her life and a source of love, support, and inspiration. Gina was full of dreams, many unanswered questions and only 11 years old.

“My father and I were inseparable and we had a great relationship,” says Gina. “That wasn’t so true with my mother, who branded me a difficult child—someone who never took ‘no’ for an answer. My father and I shared everything. He was always saying to me that I could accomplish anything I set my mind to.”

Gina grew up in a privileged family, due, in part, to her grandfather’s vision and legacy as the founder of Telesistema Mexicano (what’s known today as Televisa), the leading broadcasting media company in the Spanish-speaking world and an important TV and cable operator in Mexico.

As was customary at that time, Gina’s mother encouraged her to study but didn’t believe that a girl needed higher education, much less to study abroad, as Gina desired. Nonetheless, Gina eventually studied design. She went to work for the family business where, after a short time, she earned a promotion to management. She proved to be a keen observer with a flair for business.

After studying all the different magazines the company’s editorial division published, she realized none were aimed specifically at girls and teens. She went to her boss and said, “We have lots of magazines for women but none for girls and teens. And they need so much attention and guidance. Nobody is talking to them; I want to talk to them like a friend in their language.” Her boss told her, “No one will buy it.”

Recalling how she was branded as a difficult child who wouldn’t take “no” for an answer, Gina waited and pitched her idea again. “We can call it TU,” she told her boss, after the informal, more intimate manner of addressing a person in Spanish. Gina used her skills to draw out the logo to show her boss. “This is a temper tantrum,” he told her. “I don’t believe your project is necessary or profitable.”

Gina didn’t get discouraged. She pitched her idea again until her boss relented. “Just don’t spend too much money on it,” he warned her. TU launched in 1979; far from failing, it is still in publication, and TU’s Facebook page in August 2014 had 5 million followers. Until recently, TU had readers in Mexico, Chile, Argentina, Colombia, Ecuador, El Salvador, Peru, Puerto Rico and Venezuela.

At the UN General Assembly speaking on the empowerment of women

With my husband, my best friend and partner in life Abraham

Sitting with pride at the headquarters of Dalia Empower

CENTRO – the leading university in Mexico focused on creative studies

Representing Mexico at the W20 – the woman initiative of the G20

Although Gina had helped launch what became one of the most successful and profitable magazines in the entire editorial division, she still felt stifled working inside the family empire. She wanted something of her own. Remembering her grandfather’s teachings and the admiration she felt for him, she decided to start her own business. And she saw a problem that bugged her – the number of beautiful, colonial-era houses in Mexico City being bulldozed and replaced rather than restored and renovated. She also knew what a nightmare it was in Mexico City to buy land, obtain permits, engage an architect, hire contractors, find interior designers and landscapers, and get everyone to coordinate. Starting in 1990 with five employees, Gina created Diarq Group, a real-estate developer offering the entire suite of design-and-build services under one roof. Today, Diarq Group includes nine affiliated companies and more than 700 employees and has completed more than 650 residential and commercial projects in the U.S. and Mexico.

Good things were coming from trusting herself. Midlife, Gina had a thriving business and a growing brood at home. Not all was easy; when her third child was born with special needs, her first husband – whom she had married when she was 19 years old – left the marriage. She later wed again and had two more children with her new husband.

Although Gina was successful in her business, she was not satisfied. “I don’t want my legacy to be just a bunch of buildings,” she thought. She watched the artistic people around her struggle with being both creative and savvy businesspeople. It bothered her that youngsters that remained in Mexico were unable to study what they wanted because there were no institutions that provided a high-quality education in creative careers; and therefore, all this enormous talent was being put to waste. She also believed that the world had thoroughly changed yet education kept on using obsolete methods. She did not share the notion of teaching dividing people’s abilities according to what side of the brain they used the most, right or left hemispheres, choosing to privilege and stimulate one brain hemisphere over the other. She thought, “Why don’t we educate both sides of the brain? Why don’t we teach creative people to also think like entrepreneurs? Education is the future.”

She went to a friend who was also her mentor and said, “I want to start a university.” He gave her a puzzled look and said, “Nobody starts a university like that; you are not an academic. You are kidding me, right?”

She wasn’t. In 2004, after eight years of planning and research, Gina launched CENTRO University. CENTRO’s mission is “the professionalization of creativity.” Students not only train in design, media, cinema, fashion, art, architecture, and photography. They also study budgeting, marketing, advertising, product development, time management and finance, among other disciplines. CENTRO today offers seven undergraduate programs, 22 postgraduate courses and 200 continuing education courses, and is affiliated with leading design schools around the world. Of its approximately 3,000 students, 65% are women and around 1,000 attend on a scholarship.

Gina also saw other needs for education. As part of C200, an organization of women business leaders, Gina visited some of the world’s top universities. As the only Latin-American woman in C200, she spoke to female MBAs and Ph.Ds about her experiences, serving as a role model on how to balance their lives. She saw that many of these women – with outstanding academic credentials – lacked confidence and direction. Some fundamental ingredients for success were missing in these students’ lives. Gina thought, “What’s going on with them? What else do they need to succeed?”

“You know, babies in the hospital – boys and girls alike – have equal power when they are born,” says Gina. “Then culture and education convince girls and women to stop recognizing that they have that power. That is why I believe that nobody empowers us – since that power has always been inside us. As women, we have to make sure we own and feel comfortable with that power. And when we recognize and own our power, nobody can take it away from us.”

Being a confident leader is more than mastering the “hard skills” of business, Gina concluded. It also takes soft skills like negotiation, communication, emotional intelligence, personal resilience and networking. To teach more of these “life leadership” abilities, Gina founded Dalia Empower, a global lifelong learning project dedicated to supporting women, helping them to step into their full potential and reach both their personal and professional goals.

“My goal is to impact 100 million women in the next 10 years,” says Gina. While the COVID-19 pandemic has been enormously difficult, she acknowledges, it’s also shown how creative and resourceful women can be – and that has opened new possibilities. The “new normal” – whatever that might be – can open doors for women as the world order gets reshuffled. Through Dalia Empower, Gina is fostering a vast network of women that not only support and encourage each other, but most importantly, engage in B2B worldwide.

Gina’s own connections are wide and deep. Today she serves on numerous boards of organizations both at home and abroad. The Mexican government invited her to represent Mexican women at W20, the women’s initiative of the G20. She was recently appointed as an independent director of Santander Global after serving as an independent director of Santander Mexico. And she has been granted the Gold Medal of Honour by the American Society.“I’ve had a rich life full of amazing experiences, some of them joyful and some of them tough, but they’ve always left me with a learning experience and proved to me how resilient I am,” says Gina. “I believe that I have honoured with my actions both my father’s and grandfather’s memory.”