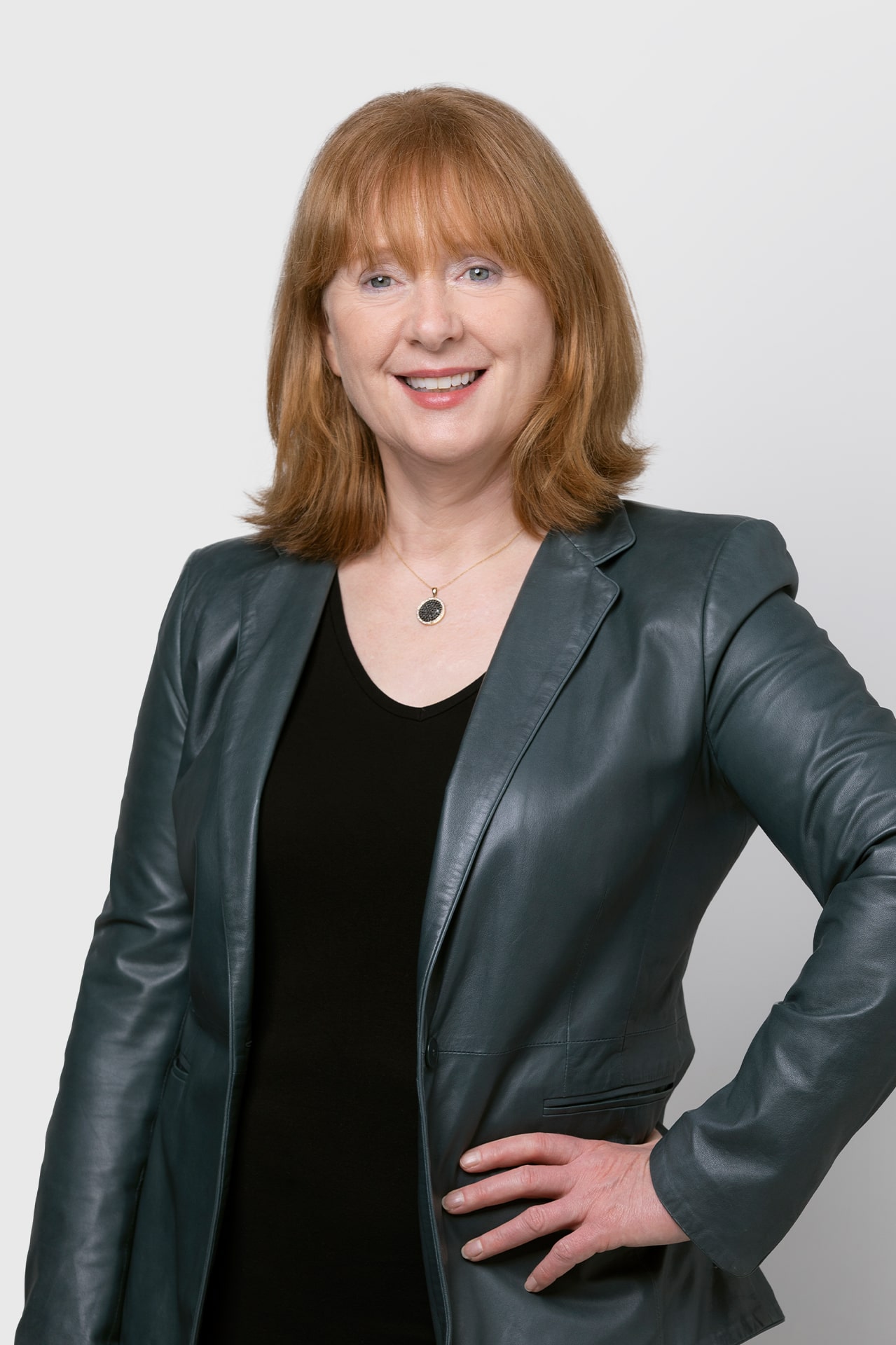 In secondary school—as high school in Ireland is known—Noelle had to run across the road to get ahead. “I attended an all-girls’ school,” she said. “And I’ve always loved math and science. But in those days the girls’ school did not offer honors math or physics. So, four of us had to cross the road to go to the boys’ school if we wanted those classes.”

They went, and they sat in the front row. The math teacher back then was a bachelor, Noelle laughs, “and he could barely look us in the eye.” And the four teenage girls sitting in the front row? “We were totally red, of course. We got poked fun at. But I never thought I shouldn’t do it,” says Noelle. “It wasn’t easy, but I never questioned it.”

When it comes to moving between worlds—like leaving relatively safe and familiar ones for new horizons—Noelle is accomplished. At University College Dublin, she eschewed majoring in banking and teaching (the smiled-upon professions for girls with math ability) to follow her passion into chemical engineering. Out of school, her first job was designing oil and gas platforms for drilling rigs in the North Sea. She even left dry land for a while to live and work on the ocean, on a drilling platform. But when she asked if she could commission one, it was clear no one was going to let a woman do that. So, she left London to work for a chemical company. One of the largest in Europe at the time was Dow Chemical, an American firm. At Dow, she became the first female Operations leader of their world-scale hydrocarbons production unit in Terneuzens, the Netherlands. Success in the Netherlands earned her a stint with Dow in Germany. Then the company asked Noelle if she would go someplace really foreign—Freeport, Texas, on the Gulf of Mexico. Noelle became Global Business Director for Dow Epoxy Intermediates, overseeing a facility earning $1.2 billion in annual revenue.

So honored to receive the 2019 Awesome Legendary Leadership Award

Graduation as a Chemical Engineer

Receiving the 2019 UCD Alumni Award in Engineering and Architecture

Presenting at a Women’s Event

“Every place I went, I was the different one,” says Noelle. “I was always the woman and I was always the foreign woman.” In Texas, she says, no one quite understood how this female with an accent and a different way of doing things could make stuff run.

“I didn’t go to college with these guys; I didn’t keep up with sports like they did; I didn’t hunt,” says Noelle. “People could not figure me out.”

But she did make stuff run. Her teams succeeded, including teams where the men outnumbered the women almost 100 to one. “I can be very driven and demanding,” says Noelle. “In a production environment, things either go well or they don’t. And my results were good.”

They were good enough that Dow asked Noelle to go to China next. She had a young daughter at the time, though, who was already on her fourth school. For the sake of the family, Noelle said “no.” She finished her time at Dow in Midland, Michigan, at headquarters as a corporate vice president.

It was time for a change. After 29 years with Dow, Noelle felt the urge to do something different. Microsoft came calling, and she headed for her next new world—Seattle and the digital universe.

Noelle now is leading the Microsoft team that builds and operates their datacenters around the world. Cloud and “edge” computing—or remote processing of vast amounts of information in vast facilities—was growing by leaps and bounds even before the pandemic. As the world began working remotely, that part of Microsoft’s business mushroomed. Microsoft currently operates more than 200 data centers globally, and the number is doubling every couple of years.

To build and operate a datacenter is to construct a very large, very secure box containing miles of aisles of servers and the fibers that connect them, stacked from floor to ceiling. It is definitely a job for an engineer, calculating how much and what kinds of land, energy, hardware, software, water, cooling, safety, and people will be needed. There are security issues and sustainability concerns. When COVID hit, many of Noelle’s team members were deemed essential workers and stayed on site, but many also were not. She has led a team that’s had to work faster than ever to meet exploding demand while also working in some ways together and in some ways apart.

“It’s where I think women are strong,” says Noelle. “It’s that balance of EQ and IQ. I like to think women are better at leaving our egos at the door” when it’s time to get stuff done, she says. And “it’s so energizing how women can just click with each other—talk all over the place, 50 miles per hour, to get stuff done. I love that. But we have to have more belief in ourselves, more courage, less ‘go it alone’ because we’re proving that we’re tough. Women already are so tough. We don’t have to prove it, especially through competing with each other.”

“Sometimes,” says Noelle, “there’s a path, even though it’s not clear.” And sometimes there’s a road you must run across to excel, and oceans you must cover, and familiar places to leave behind to find your next home.

What I would tell girls, says Noelle, is “‘You are more special than you think you are. Do what you think is right. Do it and believe in it. And take it as far as it goes.”